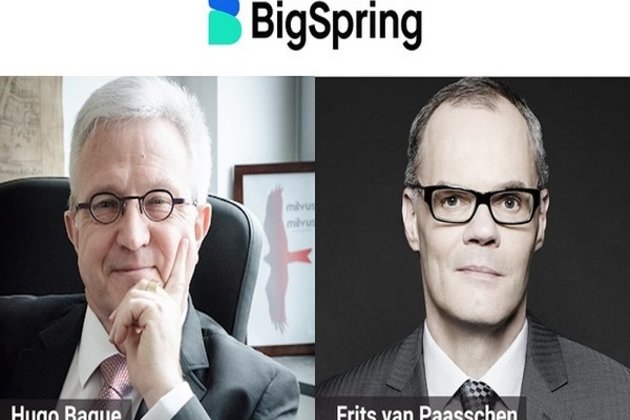 Their appointment comes as the impact of COVID-19 has mandated that organizations, large and small, retrain employees quickly and on the spot - something only BigSpring does, with measurable ROI. Uber, Google, United Technologies and Tata Steel are just some of the global organizations deploying BigSpring, bringing the total number of workers being trained to more than a half-million.

"BigSpring's mission, to provide a direct path to employment for everyone, couldn't be more relevant in today's context, first with the already widening gap in workforce preparedness given automation and AI, and now with the staggering job displacements COVID-19 has caused," said Bhakti Vithalani, Founder and CEO of BigSpring.

"I am delighted to be advising BigSpring, as the company is bringing a novel approach to a global need," said van Paasschen.

"Today more than ever, people want the chance to learn and improve their skills on the job in order to stay relevant and to grow. BigSpring is exploring the frontier of developing human potential," van Paasschen added.

Van Paasschen has been President and CEO of both Starwood HotelsResorts worldwide and the Coors Brewing Company. He held numerous executive roles at Nike, ultimately becoming President of Europe, Middle East, and Africa. Before that, van Paasschen was a Vice President, Finance at The Walt Disney Company, having begun his career in consulting at The Boston Consulting Group and McKinseyCompany.

He serves on the boards of Royal DSM and William Sonoma and previously was a director on the boards of Oakley, Jones Apparel, and Barclays. Van Paasschen is an investor and board member of three hyper-growth unicorns, Sonder, citizenM Hotels, and Convene (Chair). He is a frequent keynote speaker and Amazon best-selling author of The Disruptors' Feast.

"The ability to learn and grow has never been more important than today, as an individual, as a company, and as a country," said Bague.

"I am proud to join BigSpring, offering a platform that is a true game-changer in tackling the continuous right-skilling challenge," Bague added.

Bague is a seasoned global executive with experience in metals and mining, technology, advanced manufacturing and pharmaceuticals. From 2007-2017, he was the Group Executive Organisational Resources for Rio Tinto plc, a leading international metals and mining group. Bague was previously Vice President of Human Resources for the Technology Solution Group of Hewlett Packard Corporation.

He also worked for Compaq Computer, Nortel Networks, and Abbott Laboratories. Bague is an external advisor to McKinseyCompany, and also a Non-Executive Director with Jones Lang Lasalle, where he chairs the Compensation Committee.

BigSpring was recently designated a "Technology Pioneer" in 2020 by the World Economic Forum, joining a select cohort of start-ups that are developing cutting-edge technologies and contributing greatly to improving the well-being of society and economic growth. Past recipients include Airbnb, Google, Palantir Technologies, Spotify, TransferWise and Twitter.