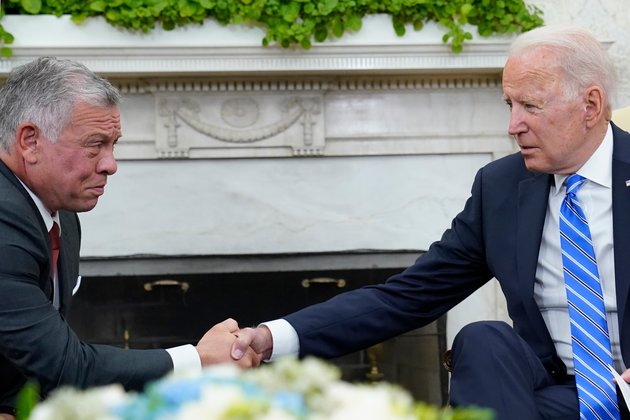 Bruce Riedel, a senior fellow at the Brookings Institution, told VOA that numerous meetings between King Abdullah and top U.S. officials are taking place to underscore American support not just for Jordan, but its moderate ruler and his position.

Abdullah, traditionally a key broker on the Israeli-Palestinian issue, increasingly found his position squeezed by the Trump administration's so-called "Deal of the Century," observers say, because the arrangement did not include a two-state solution to the conflict.

Then there were domestic and regional issues complicating the equation. In April, a royal aid, an envoy, and the king's half-brother, Prince Hamzah, were accused of an alleged plot with Saudi Arabia to overthrow Abdullah. Riedel says a new chapter is being written in a very complex relationship.

"It's very much a reset after the very difficult Trump years. Then, there has been added urgency to the need to reboot the relationship by the discovery of the conspiracy this spring. The Jordanians don't want to publicly discuss the role of the Saudis in supporting the conspiracy, but it's got to be an issue of acute concern for them and it should be an area of acute concern for Americans too. One American ally trying to destabilize another American ally is not helpful and is very dangerous," Riedel said.

Meanwhile, U.S. academic Curtis Ryan, who focuses on Jordan, told Dubai's The National newspaper that "Jordan and its partners see the new three-way alignment or axis with Iraq and Egypt as an alternative power center in Arab politics that helps to bring non-Gulf voices back to the forefront of Arab politics." In the past, the trio "worked as a united front in dealing with Gulf allies over aid, oil and investment," he said.

Riedel pointed to the July 19 visit by Abdullah and Egyptian President Abdel Fattah el-Sissi's visit to Baghdad as a "positive step" to limit Iranian influence there.

"The king has been the most energetic Arab leader by far in trying to support a stable Iraqi government. This summit in Baghdad of Iraq, Jordan and Egypt is the first time that the Sunni Arabs have ever done anything in 18 years since the fall of Saddam-that they have actually done something to not only stabilize Iraq, but to offset Iranian influence. They have notoriously, particularly the Saudis, [have] done so very little," Riedel said.

Riedel added that both the U.S. and Jordan "want American troops to stay available, particularly in that triangle where Jordan, Iraq and Syria come together to provide stability there."

Analysts also think that Jordan could house U.S. troops after they withdraw from Iraq and Afghanistan. Jordan made public a defense agreement with the U.S. in March that permits free entry of American forces, aircraft and vehicles into the kingdom.