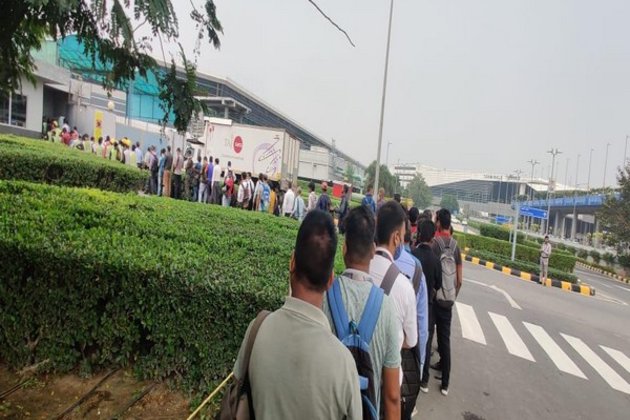 New Delhi [India], September 22 (ANI): Staff at the airport in the national capital have written to Delhi International Airport Limited (DIAL) urging its intervention to redress the issue of the huge amount of time they are forced to spend entering the airport, due to which they fear salary cuts as they are unable to report for duty on time.

The staff of the Delhi airport is concerned about deduction in their pays as the employees face a delay of 40 minutes daily to enter the airport through Steel gate 11 at Terminal 3 (T3) of the Indira Gandhi International Airport in the national capital.

Not only passengers but airport employees say they also struggle to enter Terminal 3 of the Delhi Airport. The employees find it difficult to enter the airport from Steel Gate 11.

Recently, upset airport employees wrote to the Airport Administration (DIAL Security), Duty Manager GMR, and CISF regarding the about 40-minute delay they face on a daily basis to enter the airport due to limited resources of the staff at steel Gate No 11.

"Entry inside the Airport for our jobs is becoming difficult now as almost more than 40 minutes are required to enter inside the airport premises during our duties which results in our late reporting. Long queue at gate 11 is a concern for us. Because of limited resources and awareness of staff (workforce employed for construction of airport) social distancing measures are currently on toss at in Gate 11," the letter of the airport employees read.

The employees are also anxious about meeting reporting time deadlines, as failing to do so could result in deductions in their salaries.The airport staff has mentioned the aforesaid in its letter to the top officials of Delhi Airport.

"Entry inside the airport for our jobs is now becoming difficult as it requires more than 40 minutes to enter the airport premises which results in our late reporting," the letter said.

As per a video available with ANI, long queues were seen in the morning when the employees were seen queueing up, sometimes for as long as an hour before they can enter the airport premises.

"Due to limited availability of trays, scanning matching and X-Ray machines at the security gate it takes 40 minutes every day. Employees have raised this concern internally several times but the present condition prevailing at GATE 11 is not improving at all," the employees' letter to DIAL read.

Airport staff further said that often due to a lack of adequate scanning machines at Gate number 11, they were forced to scan their tiffin boxes and laptops often in trays meant for shoes.

"Limited availability of the tray we are forced to keep our tiffin boxes and laptops in the same tray in which safety shoes are kept for scanning inside the X-Ray machine. We staff are facing health and hygiene related issues because of limited available resources in the security room from where we are entering," the letter read further.

Airport employees have expressed hope with DIAL for its intervention to the matter for a fruitful response. (ANI)