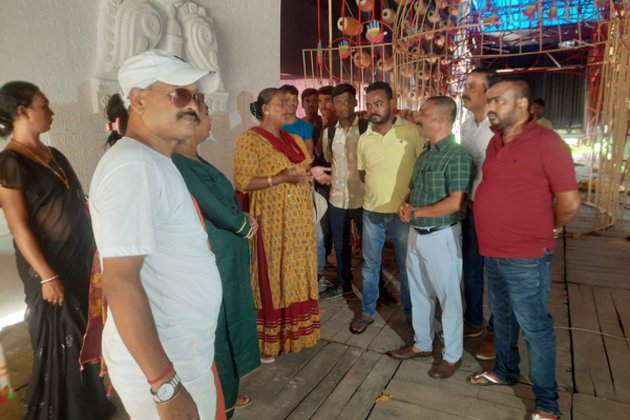 By Tarak SarkarDarjeeling (West Bengal) [India], September 22 (ANI): At a time when the Aadhaar authority accepts transgender cards as valid documents, but quite a few people discriminate against the transgender community, a Durga puja organiser in Siliguri is setting up a pandal to highlight the struggles of the community.

The Sashtika Yubak Sangha has taken 'Transgender rights' as its Durga Puja theme.

Durga Puja is the largest festival in West Bengal. In North Bengal only, more than 2000 Pujas are organised, including 652 Pujas in Siliguri itself, which comes under the Darjeeling district and is considered the gateway of Northeastern states.

This year as well, the organisers are gearing up with colourful pandals, wonderful lighting and theme-based Durga idols to catch more and more Puja lovers.

At that time, Sashtika Yubak Sangha, a popular Durga puja organiser of Siliguri depicted its theme on the Transgender community to highlight the struggles and neglect of the community.

Bappa Paul, the Secretary of Sashtika Durga Puja Committee said, "We are giving out a message by highlighting the issues of transgenders. The transgender community did not get due respect. People use to neglect them or avoid them during festivals. So we have decided that we are going to highlight their issues in the pandal and will try to send a message that they are also part of our society."Maina Kinnar, a transgender, welcomed this decision and called upon the civil society to accept the community.

"Sometimes people accept us but sometimes reject us. It is not easy for the transgender community. People should give us the minimum respect. We welcome the decision taken by a club of Siliguri for highlighting our issues. Civil society should come forward and accept us," Maina said. (ANI)